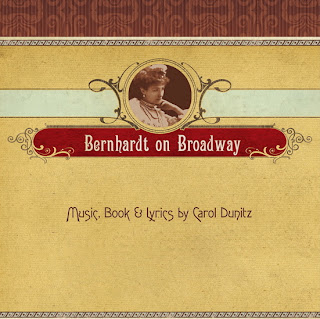 ‘Bernhardt on Broadway’ is a no holds barred exposé about the daughter of a courtesan who overcame countless obstacles to become the most famous woman in the world. Now, almost a century after her appearances in southeast Michigan, audiences can once again experience the wonder of Madame Sarah in the one-woman musical, ‘Bernhardt on Broadway.’ The show opens with Bernhardt welcoming the audience to her drawing room, a warm and cozy setting for the audience to become rapt in intimate self-disclosures via story and song about the actress’ legendary life.  http://www.oscholars.com/Upstage/issue3/bernhardt.htm 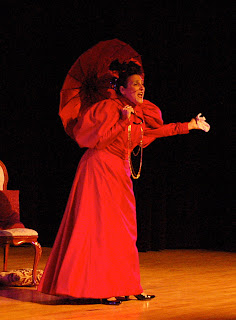 Dunitz is currently in discussion with a major Broadway producer to take ‘Bernhardt on Broadway’ to New York. The show premiered at Maxims in Chicago in October 2010.

Before mass media and modern travel, Sarah Bernhardt ingeniously master marketed her meteoric rise to superstardom. She was the WORLD’S FIRST SUPERSTAR.  Before LadyGaGa and Marilyn Monroe posed nude for national magazines, and Janet Jackson introduced the world to the concept of a wardrobe malfunction at the Super Bowl XXXVIII halftime show, Sarah Bernhardt shamelessly posed nude for renowned 19th century photographer Felix Nadar while still in her teens.

Before Britney Spears and Madonna French-kissed at MTV’s 20th annual Video Music Awards, Bernhardt spread rumors that she studied her parts in a coffin and played croquet with human skulls. Before Elizabeth Taylor was led to the altar seven times and Zsa Zsa Gabor sampled marital bliss with nine men, Madame Sarah received over 1000 proposals of marriage. 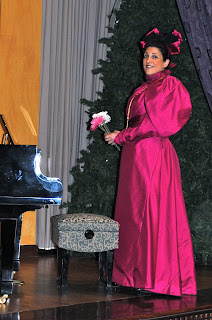 Before Joan Crawford and Bette Davis endorsed Lucky Strikes, Sarah Bernhardt touted Ogden cigarettes as well as Vaseline, Pears soap, and Guerlain perfume and got paid handsomely to do it. She was an unrivaled success in the first full length silent film, ‘Queen Eliabeth,‘ before Cate Blanchett and Helen Mirren offered their interpretations of England’s great queen. Before Richard Burton and Sir Lawrence Olivier performed ‘Hamlet,’ Sarah Bernhardt played the young prince at Stratford on Avon in French.

Mark Twain punctuated Sarah Bernhardt’s Avant Garde status when he identified five kinds of actresses: “bad, fair, good, great – and then there is Sarah Bernhardt.” Nicknamed ‘The Divine Sarah’ by Oscar Wilde, Bernhardt was the undisputed queen of theatre during her lifetime.  It is said she almost single-handedly revolutionized the place of women in the theater. Her bravery and bold abandon has become the archetype of successful women to this day.

Playwright, composer, lyricist and lead Carol Dunitz read over 100 books and articles on Sarah Bernhardt before writing ‘Bernhardt on Broadway.’ Dunitz received her undergraduate degree from the University of Michigan and holds a Ph.D. in Speech Communication and Theater from Wayne State University.  She is the author of several books in addition to ‘Bernhardt on Broadway.’ She has been writing music since she was a child. Her love of musicals dates to her childhood when her mother, who often told her she was ‘a little Sarah Bernhardt,’ took her to see Gypsy.

See video clips at www.YouTube.com or visit www.BernhardtOnBroadway.com. A media kit can be downloaded at http://www.bernhardtonbroadway.com/contact.html.

Posted on behalf of Dreamweaver Marketing Associates.  Joyce Kane is the owner of Cybertary Pittsburgh, a Virtual Administrative support company, providing virtual office support, personal and executive assistance, creative design services and light bookkeeping.  Cybertary works with businesses and busy individuals to help them work 'on' their business rather than 'in' their business.  www.Cybertary.com/Pittsburgh
Posted by Unknown at 9:12 AM